Pigs called kunekune, which are pronouced "cooney cooney," are a wise choice for small farms. Kunekune is a Maori word that means "big and round." These medium-sized, tasseled, sweet-natured pigs are native to New Zealand. Although no one is certain, it is believed that they are a hybrid of pigs from Indonesia and Berkshire, Poland China, and possibly Gloucester Old Spots.

They were on the verge of extinction. Nobody really knows for sure how they got to New Zealand, but there are a number of possibilities, including the possibility that they were brought there by whalers or transported there by Maori tribes in canoes. The Maori tribes used to raise KuneKune pigs for their lard and as a source of meat. Perhaps the phrase "keep" is incorrect because they let them roam freely, yet they stayed close to Maori dwellings. Some claim that this is how they got to be so nice and domesticated. On average, females weigh between 100 and 175 pounds, while males weigh between 200 and 250 pounds or more. They don't climb fences, and their short, turned-up snouts make it difficult to root. As grazing pigs that can flourish with minimal feed, kunekunes are a desirable breed when grain prices are rising.

Look no farther than KuneKune pigs if you want to begin raising pigs in a free-range environment. They are easy on the environment and favor grass. They have a short snout, unlike other breeds, which makes them particularly effective grazing animals. They are also incredibly cost-effective because they do not require a lot of supplemental grains.

The pork that they make is flavorful, juicy, and red-marbled, with a coating of fat surrounding it to seal in the taste. Although they take long er to develop, the pork from dogs raised for meat is well worth the wait. You take great delight in providing your family with bacon and barbecued meat from KuneKune pigs that you raised yourself.Pigs called KuneKune are very laid-back and sociable animals. When they hear you approaching the pastures, they will run to meet you. They adore interacting with people and will instantly flop down for a belly rub. They get along great with cats, dogs, goats, chickens, and ducks. Children love it when you "talk" to them during mealtime.

KuneKune pigs have wattles, unlike the majority of other breeds. In New Zealand, where they originated, they are known by the name Piri Piri. These hang just below the jowl and resemble goat wattles. Both wattles and wattles are pres 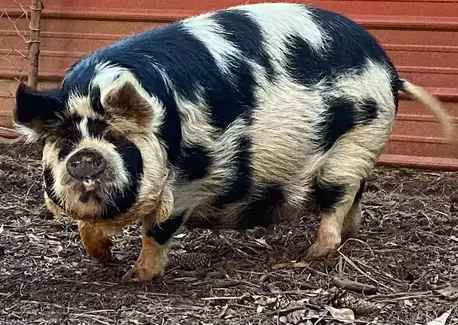 ent at birth. These wattles' inheritance seems to be random and illogical. Both double-wattled and unwattled progeny can be produced by mating two double-wattled Kunes. Two Kunes without wattles can be mated to produce double-wattled offspring. Little KuneKune pigs are extremely resilient and do well in most climates. Mature pigs only want draft-free housing and bedding to be warm throughout the chilly winter months. They must have a mud puddle to cool off in during the summer to avoid becoming sunburned and bitten by mosquitoes.

Colors for KuneKune pigs include ginger/black, black/ginger, ginger, cream, black/white, brown/white, and other combinations. They stand out from o 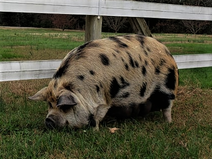 ther breeders thanks to the combinations, which give them a very distinctive appearance.True grazers, KuneKunes enjoy to graze and explore grasslands and forests throughout the day. They are highly suited for small-scale farmers because they require very little supplementation. KuneKunes are often very clean creatures and prefer to poop along fence lines.


What is a Pasture Pig?

Pigs grown outside, allowed to graze on pasture throughout the entirety of their lives, are known as pastured pigs. They are born, grow up, and live in open paddocks. Because pigs cannot thrive on only grass, pastured pork is not "grass fed" pork in the purest sense of the phrase. Pigs need a varied diet that contains a nutritionally balanced feed that includes fiber, energy (carbs), and protein in addition to necessary vitamins and minerals because they are omnivores, just like you and I.

However, the major purpose of naming them pastured pigs is to better depict how they live their life while on the farm. Pigs on pasture do eat a lot of grass and also acquire a lot of their nutritional needs from the land. In a pastured setting, there is constant access to grazing, living in spacious, open paddocks without feedlots, and no overpopulation.

The sows are protected from the elements and predators while living their entire lives outdoors and giving birth outside when pigs are raised free range on pasture. In a pastured free range system, there are typically no set sheds or buildings because housing and hutches are portable and can be moved throughout the paddocks with ease.

Pastured pork is produced in a farming system that ensures all pigs of all classes and ages are outdoors, not just the sows as is the practice in 'outdoor bred systems'.  Watch out for producers using the descriptor "outdoor born and bred" as this only describes the breeder herd and does not include the porkers that go on to become pork.

As real grazing pigs, kunekunes thrive on pasture as long as there is food available (greenery), and their nutrition is rounded out with a tiny quantity of pig feed to make up for mineral deficiencies like lysine, copper, and selenium, all of which are typically deficient in many parts of the country. (A reliable test will confirm this.) The fact that kunes have shorter, upturned noses that are precisely positioned for grazing rather than for digging up the ground like nearly all other pigs is part of what makes them particularly exceptional on pasture. You simply cannot beat kunes if you're trying to enhance pasture while preserving priceless topsoil.

Do Well in all Climates

Little KuneKune pigs are extremely resilient and do well in most climates. Mature pigs only want draft-free housing and bedding to be warm throughout the chilly winter months. They must have a mud puddle to cool off in during the summer to avoid becoming sunburned and bitten by mosquitoes.